TRADITIONAL DECORATIONS IN THE MUSEUM
December 2018

This is the season when the Lublin Open Air Village Museum creates and opens up for visitors traditional decorations in four interiors: the rooms of rural cottages from Żuków and Bukowa, a Christmas tree in the living room of the manor from Żyrzyn and a nativity scene in the church from Matczyn. When Christmas will be just around the corner, our visitors will have the opportunity to decorate the Christmas tree in the beer house from Siedliszcze. Additionally, you could also see a Christmas tree decorated by the priest’s housekeeper in the living room of presbytery from Żeszczynka. The facilities are decorated in a traditional manner, according to the script and comprehensive knowledge of Christmas customs. 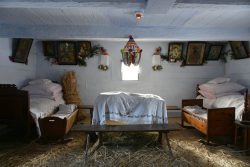 In the cottage from Żuków in the Lublin Upland sector you will see an izba (a big room inside the house) with interior dating back to the beginning of the 20th century, adorned in a very traditional manner with decorations made of tissue paper and straw.  A colourful elaborate geometric ornament called pająk (literally: spider) hangs down from the ceiling right above the table. Icons and home altars hanging on the gable wall are decorated with tissue paper flowers and fancy curtains made out of white tissue paper with geometrical shapes cut out. Spaces between the paintings are bedecked with evergreen fir twigs. Right under the beautifully embroidered tablecloth laying on the Christmas table you can find hay. There is also grain in a sieve hidden in there. In the middle of the table, before the Christmas supper, we made a nest. The sieve stood in there and in the sieve, there were four basic cereals as well as buckwheat and millet. This grain was later on given to the hens so that they lay lots of eggs. In the corner of the room, behind the bed, you could see król (literally: king) – a sheaf of rye straw made of not threshed cereal, with a Christmas wafer for all home dwellers put in between the ears of rye. Clay walls and the floor are covered with straw; all that should resemble the Bethlehem stable where the infant Jesus was born. In that period there was no Christmas tree in a cottage yet. 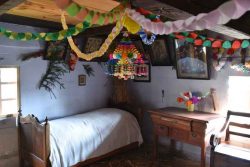 In the cottage from Bukowa in Roztocze sector the multigenerational family used to eat the Christmas Eve supper sitting around a kneading-trough. In the morning of Christmas Eve, before the sunrise, the host used to go to the woods to grab some juniper twigs, and before the sun rose, he had to put them in the corners of the farmyard so that they could serve as guardians protecting the home from any misfortunes. Among various Christmas objects, garlic cloves and honey in a glass were present, together with a Christmas wafer put under a clay bowl, because, as it was believed, if the wafer sticks to a dish it means that it will be abundance of it the next year. We used to eat the Christmas wafer with honey and every home dweller had to eat at least one clove of garlic together with its skin, because they said that the garlic had once promised: “don’t peel my precious skin, I’ll protect you from anythin’ “ – told us Wojciech Malec from Bukowa. 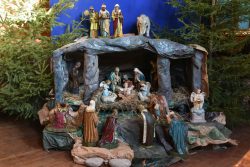 In the church from Matczyn in the Town sector you can see a crib with antique figures from the parish church in Chodel. According to the museum curator, Łucja Kondratowicz-Miliszkiewicz who conducted a research, the figures obtained from the church in Chodel for the nativity scene are divided into two groups: the earlier one, dating back to the 1940’s (incl. the Three Wise Men) and the later one, from the late 1950’s bought by the contemporary parish priest, canon Józef Frankowski. All people I talked to admitted that the former nativity scenes in the church after 1945 were made in the form of a rocky grotto with elements of mountain landscape, starry sky with an Angel in the background, spruces on both sides of the crib. Later on, so about 20 years ago, the currently known form of the crib, so a birchen cottage, etc., appeared. 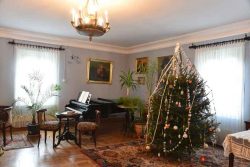 An angel made out of paper and white tissue paper sits on the top of the beautiful, richly decorated Christmas tree in the manor’s living room. As Andrzej Kiełczewski, the descendant of landowners, says, the Christmas trees in manors usually looked like this, but sometimes there were also stars made of silver foil on the top. The tree is decorated with a long white chain made of small, straw-tissue paper links symbolising the unbreakable family ties, and with colourful ornaments made of natural products such as blown eggs, cones or walnuts painted gold. The Christmas ornaments are made of very simple and basic, as well as easily accessible during the inter-war period materials as: construction paper, tissue paper, beads and silver candy wrappers sparkling in the light of candles. The antique traditional ornaments are made of exactly of these; back then children used to do them together with the adults during the Advent. The decorations resemble following things: peacock eye spots, spiders, butterflies, mushrooms, ballerinas, angels, stars, and baskets. There are also storks made out of cotton wool, more abstract decorations called werbenki (vervain) and scenes from Christmas wafers. There were also colourful Christmas glass balls that could be bought in the town back then. Also, special Christmas candies had to be put on the tree because all children really loved them. The Christmas tree in the presbytery from Żeszczynka was decorated in a similar way.