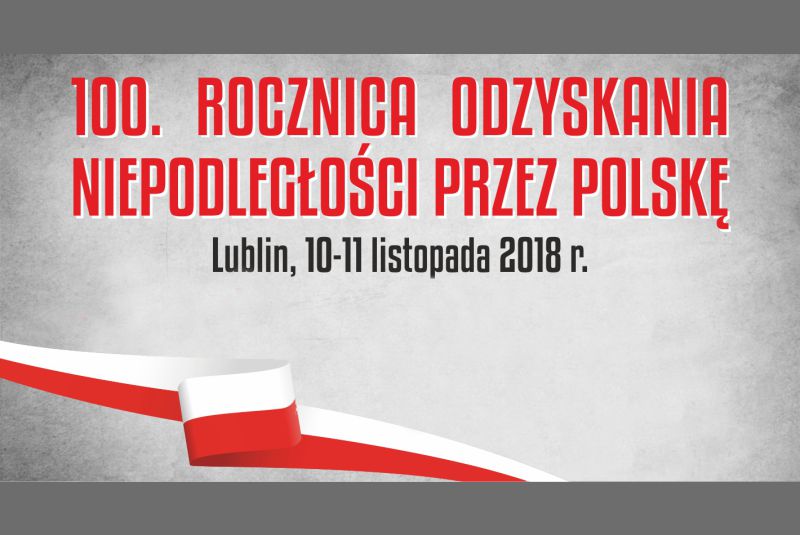 On behalf of the Lubelskie Province Governor, Mr. Przemysław Czarnek, we would like to invite you to take part in events and celebrations on the occasion of the 100th Anniversary of Poland regaining Independence, which will take place in Lublin on the 10th-11th of November 2018.

The attractions prepared for the residents of Lublin on the occasion of the 100th Anniversary of Poland regaining Independence include bonfires called Ognie Niepodległości, the unveiling of Maszt Niepodległości (independence mast), a patriotic picnic, concerts, exhibitions and many more.

The celebrations will start with a patriotic picnic “Służymy Niepodległej” (we serve the Independent Poland) on the 10th of November. During the picnic, it will be possible to watch the shows organised by the Armed Forces of the Republic of Poland and uniformed services, stalls with light and heavy weapon, armament and equipment, participate in juggling workshops, learn fencing and shooting a bow, take part in concerts and sing together. At 9 p.m. in many communes, the bonfires called Ognie Niepodległości will lit. In Lublin such a bonfire will be lit at 4.30 p.m. in Park Ludowy.

The official celebrations of the Independence Day will start on the 11th of November at 11.45 a.m. at Plac Zamkowy. There will be many events, such as independence urban game organised by scouts, the concert “Młodzi dla Niepodległej” (The Young for the Independent Poland) in Filharmonia Lubelska (Lublin Philharmonic) and the 3rd edition of the “Nocna Mila Niepodległości” Run (Night Independence Mile Run).